Virpazar is a small Montenegrin village, notable for its tranquility and tranquility. Here come those who want to really relax and enjoy the surrounding nature.

Small Virpazar is a part of the municipality of Bar. This settlement is located at the western part of the famous Skadar Lake, in the place where the river Tsrmnitsa flows into Orahovshtitsa. Virpazar is surrounded almost from all sides by water, which is why it is often compared to Italian Venice. There is no sea in it.

Fortress Besac is one of the oldest military buildings preserved in Montenegro. The fortress is located near the Skadar Lake, not far from Virpazar. It is erected on a low hill, from where you can admire the views of the mountains.

The fortress itself was built in the XV century, during the prosperity of the Ottoman Empire. Once this building separated the Turkish land from the Slavic. Now the fortress of Besac is considered to be the most valuable historical monument of the Balkans.

The Monastery of Verkhnie Brchely is located a few kilometers from Virpazar. The religious building stands on a hill at an altitude of about 1000 m above sea level.

The monastery complex includes four buildings: the church itself, the bell tower, the school and cells, where the monks live. All buildings are at different heights. They are fenced with a large stone wall.

If you believe the legends, the monastery of Verkhnie Brchely was built during the reign of Balsic. At the same time, historians argue that the main church can be attributed only to the XVIII century.

Skadar Lake is the largest fresh water body in the Balkans. It covers an area of ​​475 km² and belongs directly to two countries: Montenegro and Albania.

Boats and kayaks, where you can get to the Skadar Lake and see it in all its glory, depart directly from Virpazar. Walking along the pond is an obligatory part of the excursion program for all who come to this Montenegrin village.

From the west Skadar Lake is surrounded by mountains, from the north and east - plains. The banks here are shallow, swampy places. In the lake you can swim and fish, what is happening with tourists are vacationing here tourists.

Skadar Lake is remarkable for its rich fauna. On its territory you can see the lake gull, coot, cormorant and even more than 280 representatives of the world of birds.

The islands, located in the middle of the Skadar Lake, have preserved ancient structures. In the restored Monastery Moracnik you can see ancient murals with barely surviving images of saints. The monastery Beshka with a huge dome, stone slabs and neat carvings is a valuable architectural monument. 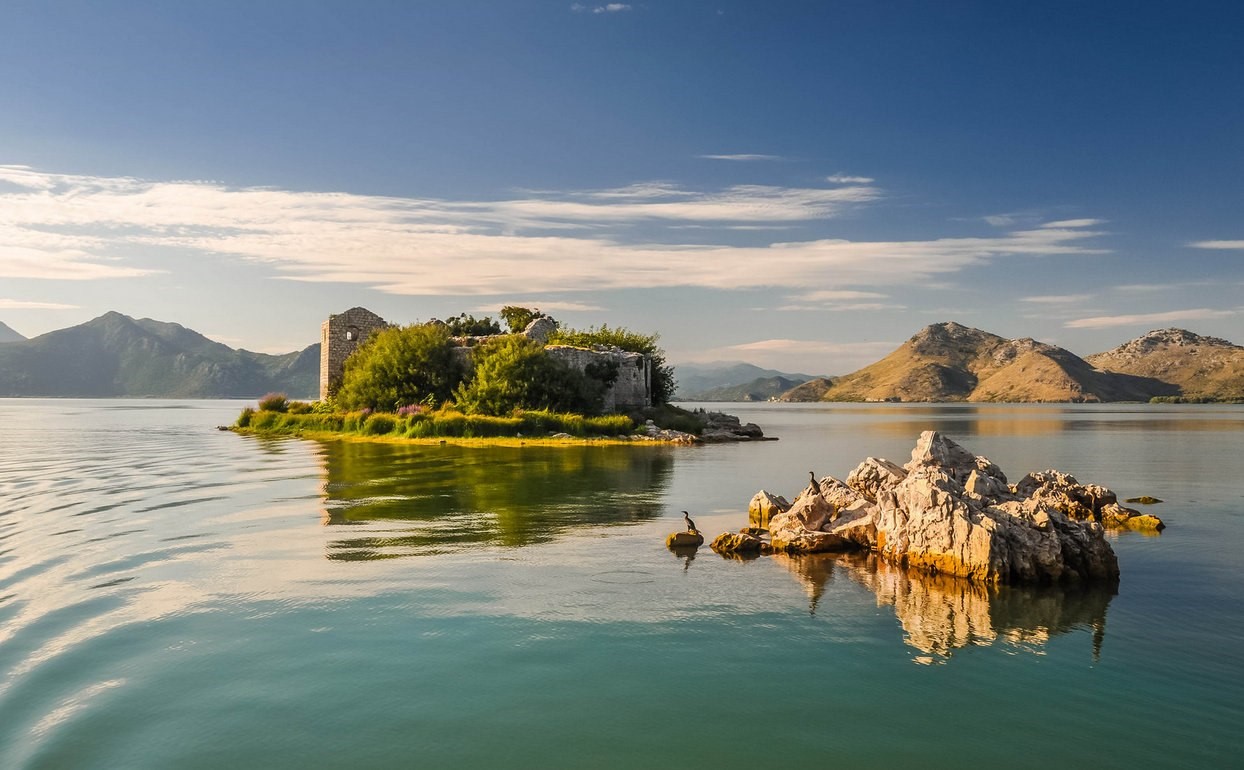 Virpazar is an ideal place for fishermen. To get a good catch, it's enough to get settled on the shore. Some rent a boat and spend whole days fishing and resting on local water bodies.

Virpazar is famous for its remarkable wine, which is served in almost every institution. All wine drinks are made in the village or its surroundings. In supermarkets, local wine is not to be found.

Especially popular in Virpazar are the cannabis - small home-style restaurants designed for 10-12 people. They serve traditional Montenegrin dishes. In konobah reigns a cozy and hospitable atmosphere.

Every year in Вирпазаре the Festival of wine and уклейки is spent. The festival is held near the Skadar Lake, for which a stage is even built here. In tents, which locals install, you can taste wine products, rakia, honey, cheese, as well as a sticker - a slightly sweet taste of freshwater fish. Tasting is free, all you like can be bought.

In small shops Virpazar you can buy souvenirs and handicrafts. In this village there is also a spontaneous market where fishermen sell their catch.