The dancer from Budva

The city of Budva is a tourist center of Montenegro. The raging life doesn't stop here for a second. Each tourist will be able to find entertainments on the taste in this city: night discos, cafe and restaurants, platforms for tennis and soccer, comfortable beaches, and also surprising sights and architecture.

The most popular sight of Budva 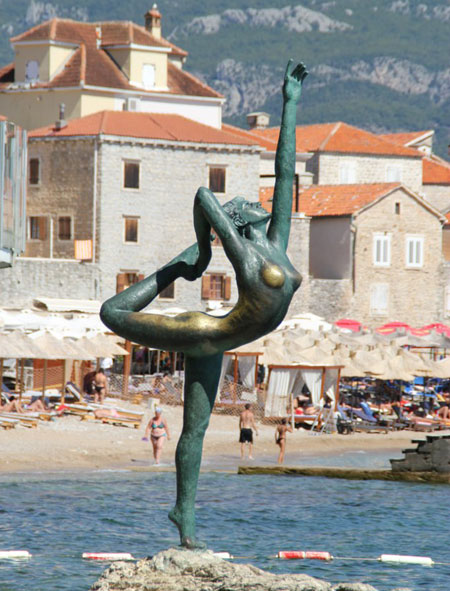 One of often visited places in the city, is the Dancer's monument from Budva. Inspired by colourful stories about love, the sculptor Gradimir Alexits created a surprising sculpture from bronze as a certain symbol of devoted and infinite feeling. The bronze sculpture has several names: "Dancer from Budva", "Gymnast from Budva" and "Ballerina from Budva". The last name not exact because on the girl there is no pack (a special skirt of the ballerina).

This graceful girl became a city symbol. The monument to the dancer is on the rocky coast near the pebble Mogren beach. With the girl's sculpture, everyone who visits a resort Budva has photos. The beautiful sight is shrouded in fog of legends and superstitions. Among locals stories that having touched a brittle figure of the girl go and having made a wish, it will surely come true. Thousands of tourists come to check force of a magic statue. Polished separate parts of a body of the dancer demonstrate to it to gloss.

About the sculpture birth many years go beautiful and sad stories. Someone considers that the monument is erected in honor of the gymnast from Montenegro which tragically died, having broken from the rock. But nobody remembers an exact name of the girl and when it happened.

One more drama legend narrates about loving couple. Young people, bathing in waters of the Adriatic Sea, were attacked by the sea monster. From attack of a shark only the girl could escape. She by miracle could get out to rocky stones and in the wearying expectation waited when on the coast the guy comes up it. But the miracle didn't happen. The girl for many years came to the place of death of the beloved and long peered at dark empty waters. After her death, on one of stones there was a sculpture reminding of eternal feeling and devotion. 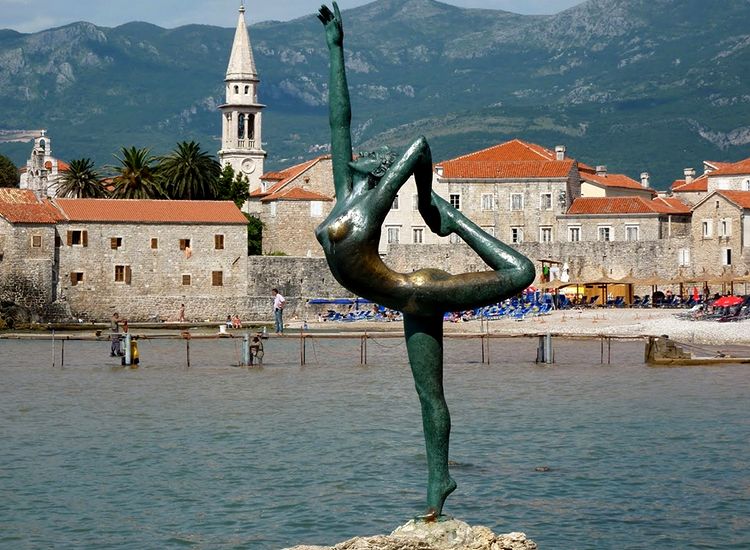 There is one more romantic legend which squeezes heart. Two lovers, the dancer and the young seaman lived in the city of Budva. The guy went to swimming for a long time, and the girl it was necessary to wait for it return. In painful expectation there passed it days. The bride returned every evening to the sea and peered at the line of the horizon. The young girl, spent long hours waiting for the promised ashore. Years went, but the ship didn't return. The ship with the promised never returned to the native harbor. The bride died, having remained faithful to the beloved till last days. The sad story about fidelity and self-sacrifice became an example for all loving couples.

Exactly near a bronze monument to the dancer, fantastic views of the sea and the coastal city open. Thousands of tourists come every year to Budva and without fail visit a legendary sight.