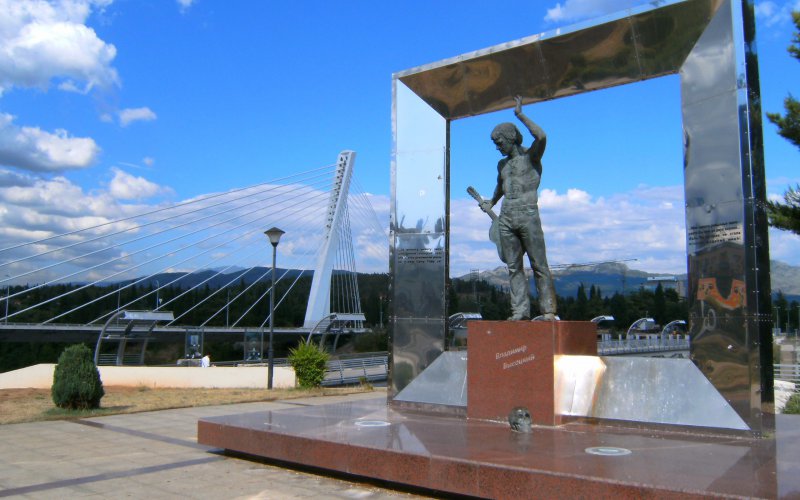 Vladimir Vysotsky is a legendary Soviet poet and singer of bardic songs, without which we can no longer imagine our national culture. The memory of Vysotsky is honored not only in Russia, but also in other countries in which he managed to visit. One of them was Montenegro.

Vysotsky visited Montenegro twice. Every time he spoke warmly of this Mediterranean country. For the first time the poet arrived here for filming in a Soviet film in 1974.

After filming, Vysotsky participated in a local television program. He talked about himself and his work, performed a song from the film and in conclusion presented a newly composed poem dedicated to Montenegro.

The poem "Montenegrin Motives" reflects Vysotsky's respect for the indigenous inhabitants of the country. At the end of the verse the bard expresses regret that Montenegro can not become his second homeland.

Vysotsky again returned to Montenegro a year later, but already with the Taganka Theater Company.

Montenegrins also appreciated the talent of the Russian poet. They loved his sonorous voice and were imbued with non-standard songs for those times. In many respects this was facilitated by the fact that the Montenegrin language is very similar to Russian. 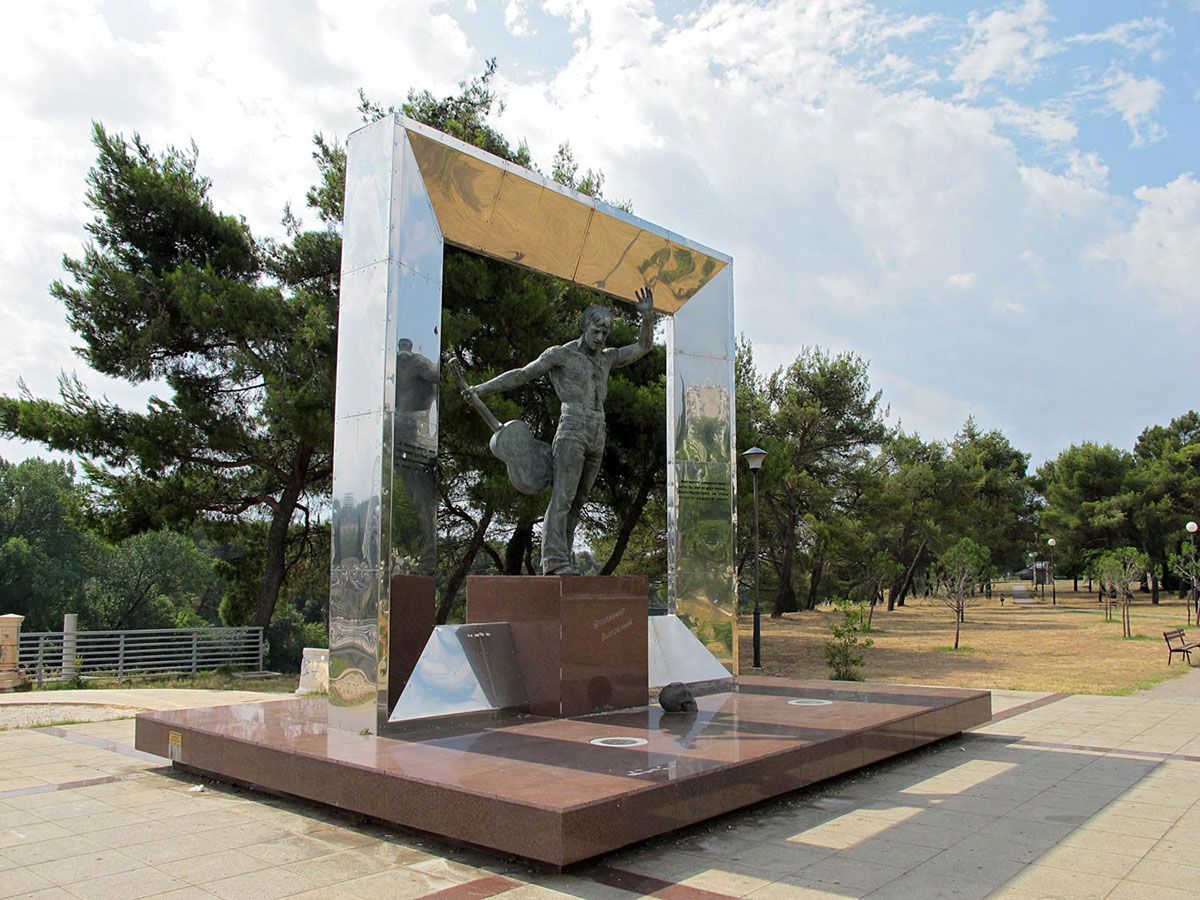 The grand opening of the monument took place in October 2004. It was attended by the poet's son, who now manages the museum named after his father. Nikita Vysotsky thanked the local residents for their attention and memory to the poet who had died.

The mayor of Podgorica attended the opening ceremony of the sculpture. He announced that Vysotsky's voice instilled hope for a change for the better, they heard millions of people, including many Montenegrins.

Since the sculpture was donated to Montenegro on behalf of Moscow, representatives of the Moscow administration were also present at the opening.

The monument to Vysotsky is located in Podgorica, the capital of Montenegro. The monument is located on the bank of the river Moraca. You can easily reach it from the Millennium Bridge or the Moscow Bridge. The monument to Vladimir Vysotsky stands on the side of Jovan Tomashevich Street. Next to the sculpture there are several small pedestrian streets and a children's playground.

On the map the monument to the poet is as follows:

The monument to the great Russian bard has become a local landmark. He is eager to visit not only Russian tourists, but also tourists from other CIS countries, where Vysotsky is also loved and honored. In the high season near the monument there are almost always tourists, and therefore it can easily be seen from afar.

The monument to Vysotsky was designed by the Russian sculptor Alexander Taratinov. He also designed in Podgorica a monument to Alexander Pushkin, which was erected here at the request of the Montenegrin authorities.

The sculptor portrayed Vysotsky standing on a low pedestal and looking down. Bard imprinted with a guitar, with which he almost never parted. His figure is depicted in the dynamics, with one hand raised up.

Next to the figure of the bard lies a bronze skull - a memory of the remarkable performance by Vysotsky of the role of Shakespeare's Hamlet. This was one of his last speeches.

Sculpture is surrounded by a kind of pedestal that visually resembles a television screen or scene. This gives the monument a symbolism.

On the pedestal the last lines from the poet's poem about Montenegro are carved. On the one hand, they are derived in Montenegrin, on the other - in Russian. 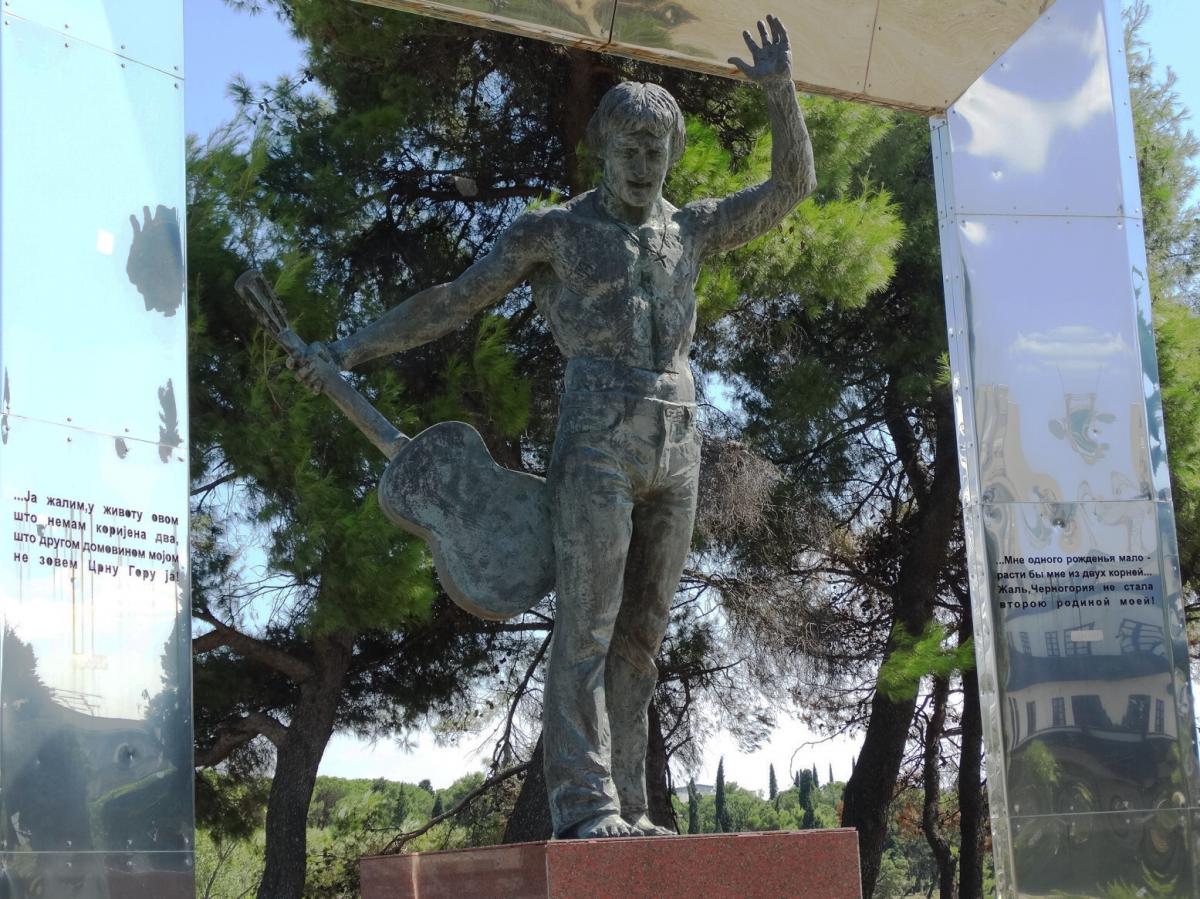 The monument itself is completely cast from bronze. In height, it reaches about 5 m. Bridges that are nearby, harmoniously complement the sculpture of the great performer of poems and songs.

Tourists who visited the Montenegrin monument of the bard, note the amazing similarity of the bronze figure with the real Vysotsky. This is the merit of a skilful sculptor.

Now the monument to Vysotsky is considered one of the most visited sculptures of Montenegro. His special love for indigenous people.