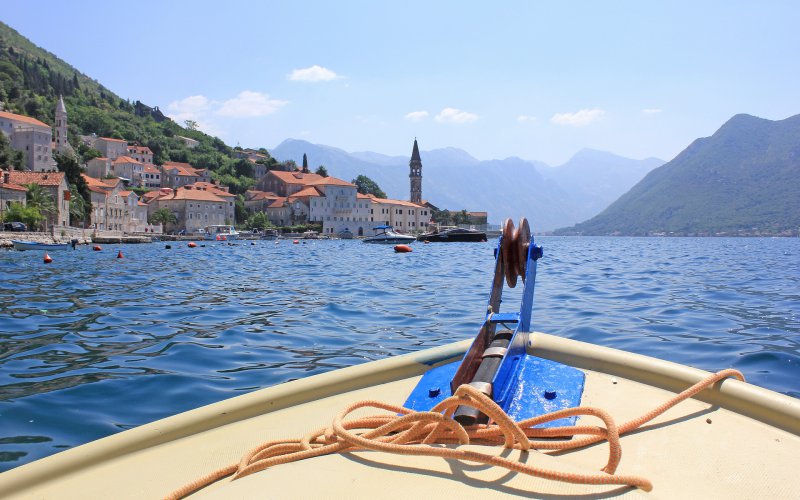 Travel to Montenegro without visiting one of her most famous resort cities Kotor? It's impossible! Because Kotor is something more than just a tourist town on the Montenegrin coast. First of all, it is the heart of the Bay of Kotor, which is surrounded by its unique fjords that every year attracts more and more tourists and cruise ship passengers. It is known for its landscape, like made for a postcard, and wonderful views of the Adriatic Sea from a height of inaccessible gray rocks or a small picturesque road leading from Herceg Novi to Risan.

Usually towns of Montenegro are located in accordance with the scale of occupied territory: small towns are grouped around the center, mostly pedestrian. Thus, the population of Kotor’s people is only 19 000, including its entire municipality. 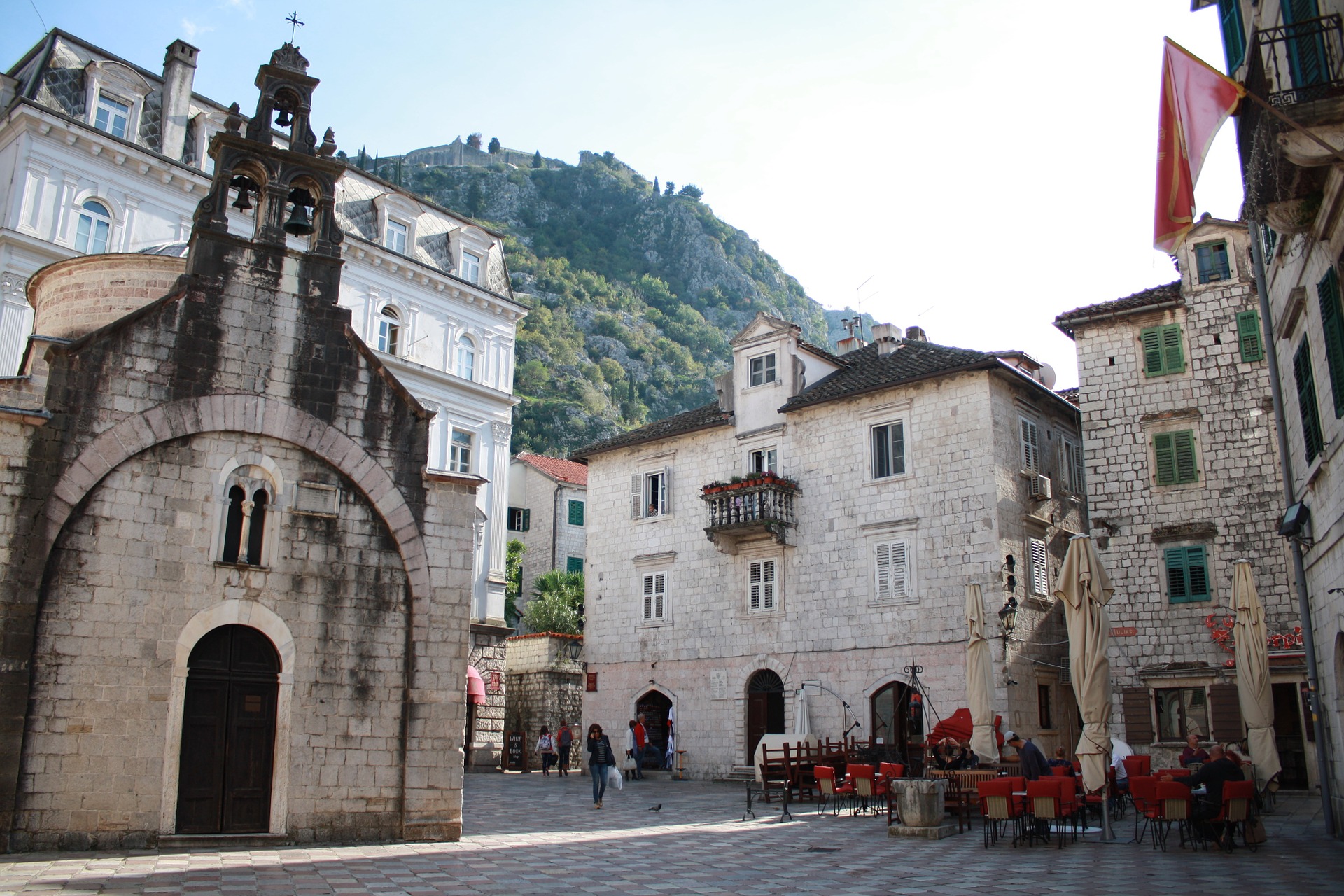 The door to the Old Town

Visit the town of Kotor means going to a meeting with a rich past, consisting of multiple occupation periods and battles: here it is confirmed by the stones on each step, and opening an important page in the history of Montenegro, directly connected with the sea and warlike sailors, formed over several millennia. Since 2006, Montenegro is an independent state with a stable and peaceful political environment, but namely Kotor stores all the fingerprints and footprints of those who tried to conquer it. Visit to the main town on the Montenegrin coast will be a worthy event for any tourist, especially if you are fond of history and love ancient architecture. This is a great merit of the old town, called Stari Grad, which makes the city particularly attractive due to the influence of a mixture of several ancient cultures, in particular Italian and Slavic.

The medieval citadel towering over the Old Town from the slopes of the mountain, which are adjacent to the city, offers a magnificent view on the Kotor’s Bay.

Coming here, tourists will be amazed with impressive walls of the Kotor fortress of St John, the purpose of which was to protect the city. Now they remind us of how long the city was a desirable aim of owning in the heart of many invaders. If you cross these fortifications, among which is situated the citadel, you can feel the lasting influence of Venetian culture, which manifests in architecture of buildings. Due to the broad overview from the upper terrace on the Kotor fjord, the citadel is an important element of the cultural program of the investigation of the city. And even a climb up a steep road creates an indescribable impression of adventure, without which it is impossible to leave this place.

This unique atmosphere makes the tourists in a hurry to leave the ship anchored at the port, and, without thinking, to go take pictures of the main sights of Kotor: the Main gate, the Clock Tower, the Central square with the palaces of the ancient Venice style. 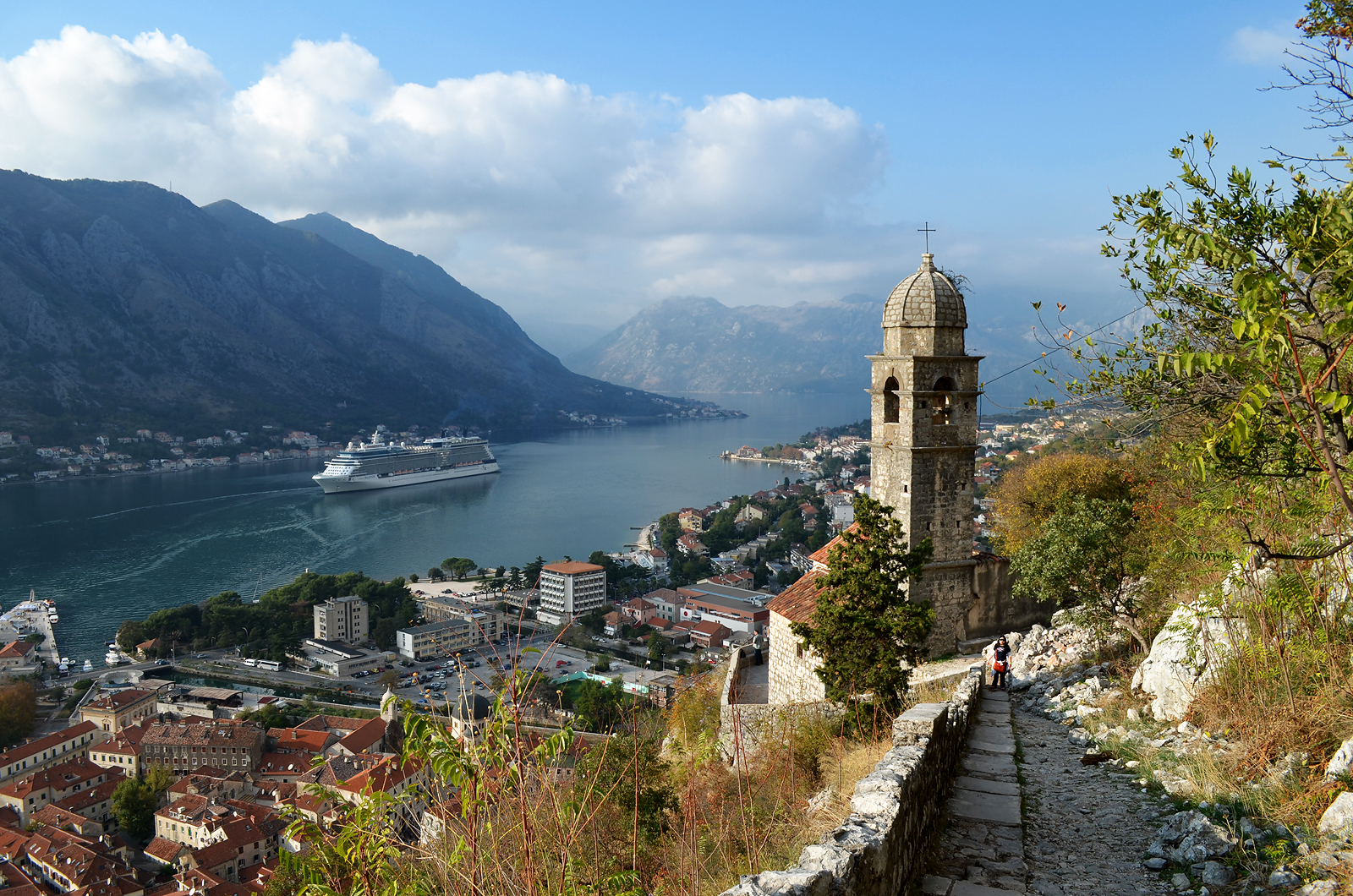 However, the historic part of Kotor is not confined to its fortifications and the fortress of St. John. Its small cobbled streets, old stone houses, Venetian Palace give it a special charm. There are three doors that give an opportunity of the entrance to the old town of Kotor. The main entrance called Sea Gate, or West Gate, built in 1540. Its output port and convenient location for arriving by sea travelers explain the fact why tourists prefer it. So they can immediately make beautiful pictures on the background of Armory Square, the Belfry and Ducale Palace.

North Gate, built in 1555, also known as the River Door. Grid of the North Gate is connected by a bridge with the canal over the river Skurda. After passing the North Gate, you will approach to the area of OdDrva and St. Mary's Church, built in 1221, the facades of which are decorated in the Romanesque style and contrast with adjacent, more recent bell tower, restored in the 16th century. Less known is the door in the southern part of the city or the Gordic Door that opens, perhaps, a more original point of view to Kotor.

When is the best time to go?

Kotor is profitably characterized by a pleasant climate all year round. If in the summer, you want to avoid the heat and too large influx of tourists, June and September are the most recommended months, as they offer a more relaxed tour and good weather. The water temperature hovers around 22, if you want to enjoy the beach season.

Moreover, prices this season are noticeably lower, which is very noticeable to save money on a hotel or apartment for rent in Kotor. The trip in October is also a good idea, as the temperature still allows you to walk along the sea and enjoy walks in the surrounding area. In April and May there is little likelihood of more intense precipitation.

Walk through the alleys, where you will be able to experience a very unhurried rhythm of lifestyle of the city, lit by the rays of the sun in the summer and spring and characterized by a mild climate in winter and autumn.

If you compare the cost of accommodation in Montenegro as a whole, the city is quite expensive, if you intend to buy an apartment in Kotor. Tourists more often choose a hotel, cost of which depends on its location respectively the old town. The starting price for a room in 2-star or 3-star hotels is around 60€ and in the luxury national standard hotels of Kotor achieves 140 – 180 euros per room. Cheaper is to rent an apartment. For example, the prices of apartments vary from 30 to 40 euros for two people depending on location: in the historic part they are often doubled.