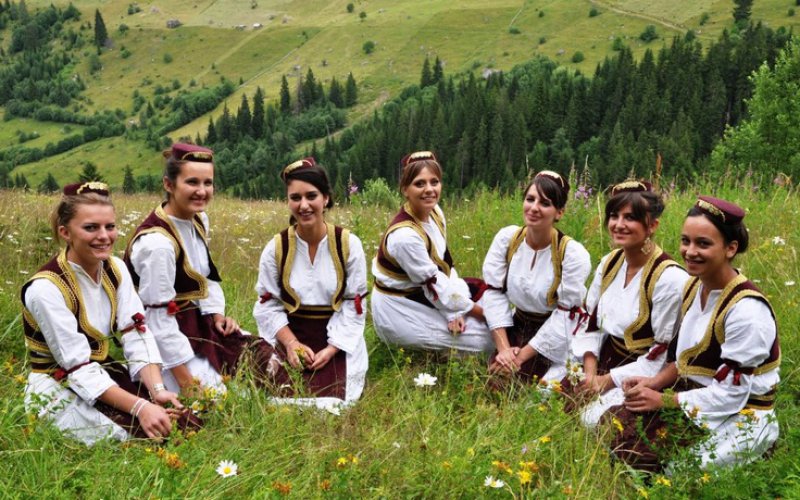 The women of Montenegro are noticeably different from our compatriots, which manifests itself both in appearance and in character. Below we will talk about this in detail.

Women of Montenegro have a bright and attractive appearance. Tall, long-legged, lean, with shiny hair, almond-shaped eyes and delicate features - that's how you can describe most of the girls and women in this country.

The amazing beauty of monocrops is largely due to the fact that since childhood they have paid great attention to appearance. Women in Montenegro regularly do manicure, often visit hairdressing salons, monitor the skin condition, buy expensive perfumes and dress with taste.

In everyday life, many girls and women prefer street or sports style. On holidays and walks Montenegrin dress up in dresses in the floor and put on high heels. Although in the cities some girls allow themselves explicit attire, this does not affect their relationship with the opposite sex. Women in Montenegro are often called extremely hardworking. Sometimes they say that they work harder and harder than lazy Montenegrins. The reason for this is easy to understand, deepening into history: the country has always been dominated by agriculture, and people mostly lived in villages where women had to take on male work.

In ancient times there was a strange custom in Montenegro: if girls were born in the family, the father had the right to change the sex of the next child. The girl was given the boy's name and from an early age was raised as a future man. Such girls were called virgins, they were considered honorable.

Now this tradition is no longer practiced, but in the villages women continue to work more men. In cities, duties are generally distributed evenly. In some families, husbands exploit wives, and they unquestioningly fulfill all the requirements.

In Montenegro, ladies rarely occupy leading positions. This is due to their desire to follow the generally accepted way of life. Most of Montenegrin women have a family in the first place. Many couples here bring up three or more children.

Almost all of Montenegrins are jealous and negatively regard treason, although they themselves actively practice them. True to their spouses, women are forced to get used to the deplorable state of affairs. Divorce proceedings here cost several thousand euros and is not popular.

In the nature of the Montenegro, sentimentality is laid. The most long-awaited event in the life of many girls is the offer of the hand and the heart, and the worst is the break with the beloved person.

Women in Montenegro keep their reputation from an early age. Due to the small size of the country, rumors spread very quickly here. If the girl was illegible in her youth, she would not want to marry later. Montenegrin men like to gossip and take relations with the opposite sex for everyone to see. All this affects the behavior of the monks, which is characterized by restraint and even coldness.

Ladies here behave with great dignity and sometimes show excessive coarseness. Because of this, many men prefer foreign women who seem to them more affectionate and cute. To Montenegrins, they are more like friends.

Young girls in Montenegro do not flirt with young men, and adult women do not build eyes to men. They even greet each other with a handshake, hugs and kisses are not accepted here. On the handshake, the man determines the character of the woman: if it is strong, then it is open and reliable, if the weak one is closed and not sure of itself.

Montenegrins are not alien to bad habits. As the most common and pernicious of all, one can single out the love of smoking. Cigarettes here indulge everything: teenagers, pregnant women, married women, grandmothers. Mothers do not hesitate to smoke with young daughters, and they quickly adopt the habits of adults.