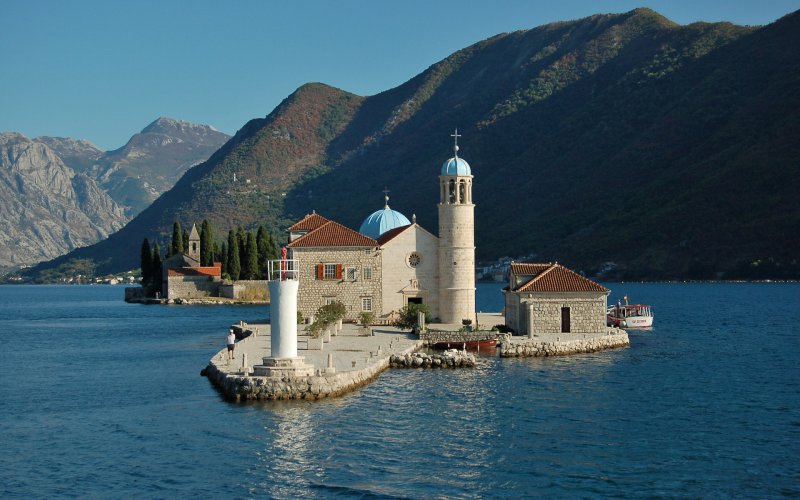 Church of the Mother of God

Church of the Mother of God on Scala (Gospa-od-Shkrpyela) – one of the most interesting sights and shrines of Montenegro. It is unusual already the fact that it is located on the man-made island which grew in the Kotorsky gulf thanks to efforts of residents of Perast. Once on site islands there was only a small reef which was slightly acting from water, but for several centuries citizens turned it into the extensive plateau more than 3 thousand sq.m.

For many years Perast's inhabitants who were always famous as experienced seamen and brave soldiers flooded near a reef the old ships and the seized piracy vessels therefore the seabed in this place was covered by wooden fragments. Emergence of the island was promoted much also by the law obliging all ships passing here to throw stones on a bottom. So gradually small ledge turned into a picturesque island in the middle of transparent waters of the Adriatic Sea.

The idea to construct here church arose after in the middle of the 15th century two seamen found the Virgin's icon on reef stones. As it appeared there – it is unknown, but on a legend, after an unusual find one of seamen recovered from a heavy illness. The icon at once became esteemed, and soon for it on the island built the temple of the Mother of God - Putevoditelnitsa, ukazuyushchy a way and protecting all wanderers. Unfortunately, the first church strongly suffered from an earthquake of 1667, but after it built up and reconstructed in the Venetian style. Height of church is 11 meters and, despite external simplicity, it is the real decoration of the island. 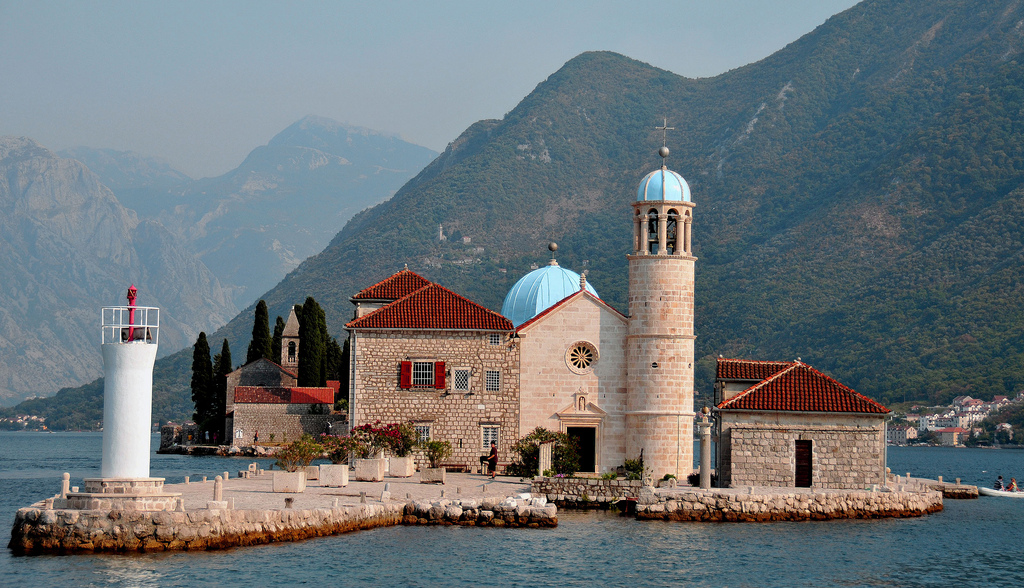 Especially worked at its finishing at the end of the 17th century when Perast reached top of the blossoming. Painting of church was entrusted the talented master of Tripo Kokol studying art of painting in Venice. Ten years the artist worked on walls and the arches of the temple, representing plots from Life of the Virgin and images of angels and prophets. In the middle of the 18th century at church the spacious terrace surrounded with a stone balustrade in style of the Venetian Renaissance was built. In an upper part of ladder barrier there is Perast's coat of arms: two hands holding a cross.

From the northeast party the church is adjoined by a small sentry lodge where now there is a museum with a collection of unique exhibits. Among them – the well-known icon of the Mother of God embroidered with one townswoman for many years of expectation of the husband from swimming. Gold and silver threads and also own hair of the woman every year becoming everything went to an embroidery is more white and are more white.

The past and the present 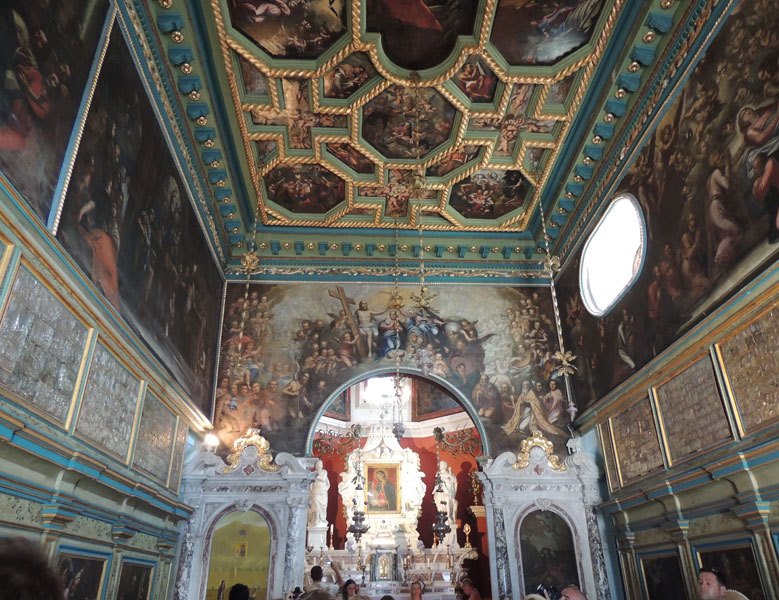 Today about 70 pictures painted by oil and more than 2 thousand gold and silver plates created by Perast's jewelers are stored in church. Seamen brought these plates in acknowledgement of rescue or with entreaty about the favorable result of swimming here. Besides, for a long time it is considered good tradition to leave the objects symbolizing the fortress of conjugal ties here – rings, bouquets, wedding wreaths.

The altar of work of the Genoa sculptor Kapelano Antonio is difficult from the most valuable Carrara marble, and in its center there is the most sacred object of church – that icon which history is inseparably linked with island history. If to bypass an altar, in a stone behind it it is possible to grope small deepening. The icon was also found in this place. They say, if to put a hand here and to make a wish, it by all means will come true.

To dump custom in water at the island stones I remained and up to now that helps to stop its degradation by the sea. Also annually in the middle of the summer there takes place the traditional holiday here – a fashinad within whom the regatta on an action Cup is carried out. Vessels from all Kotorsky bay take part in it, and, floating by the island, today's seamen render a tribute of nice memory of seafarers of the past and throw stones into water.